A 360° Survey requires that each individual in the survey to be assessed by the superiors, their peers, their subordinates and themselves.  This requires a data structure that identifies for each individual, who in the organization fits into the 4 roles described above.  Assembling this information can be a complex task and a number of pitfalls need to be avoided.

In a rigidly hierarchical organization the information can in principal be assembled from an organogram which identifies the structural relationships between each individual.  In this instance every individual directly under the same manager is considered a peer, while the subordinate and superior fall directly from the structural data.

DMSA is able to generate the desired outcome from an organogram which is structured in a data table.  However in practice this seldom produces a completely satisfactory solution. The tendency towards flattening of hierarchical structures in modern organizations coupled with the pressures of globalization often results in organizations having multilayered structures.

• Individuals may do most of the work outside of the division they reside in.

• In a large division individuals may actually on interact with a small selection of their defined peers.

• Individuals may have recently moved resulting in inaccurate data records.

• Organizations generally record structural information for financial rather than for operational reasons and these may not coincide.

There are a number of potential solutions to this difficulty.  In general it is often a good idea to use the organogram as a starting point and then refine the lists later.

• Have line managers confirm the structure.  In this approach line managers are requested to identify the peers and subordinates for all of their subordinates.  This has the advantage of bringing the decisions closer to where the decisions are made but requires considerable effort by the line managers.  This will require a strong support for the process from the senior management to ensure this happens.

• Let HR manage the process.  This has advantages as there are fewer individuals responsible.  However HR does not necessarily have access to the data required and will in turn have to rely on the managers.

Ultimately which combination of the above is chosen depends on the company structure.  Whatever approach is adopted it is important to provide employees with an opportunity to comment on their chosen raters.

Some general guidelines should be followed.

• While it is not possible to limit the number of subordinates an individual has to rate it is important not to overburden the raters which may undermine the process.  In particular for the peer rating it is ideal for each person to rate 4 to 5 peers if this is possible.

• There is an issue of confidentiality if there are too few subordinates.  Ideally there should be at least 5 subordinate ratings.de.

The final dataset should include for each person being rated.

• Their name, surname and title in separate fields.

• A unique identifier, e.g. Staff No.

• An email address for internet based administration.

• Level in the organization.

• Then for each additional rater.

o Their Role, i.e. superior, subordinate or peer.
o Their name, surname and title in separate fields.
o A unique identifier, e.g. Staff No.
o An email address for internet based administration.

Based on this DMSA will prepare a preliminary report on

• How many raters of each type each individual has.

• How many ratings of each type each rater needs to do.

This can be used to confirm the adequacy of the current data set. 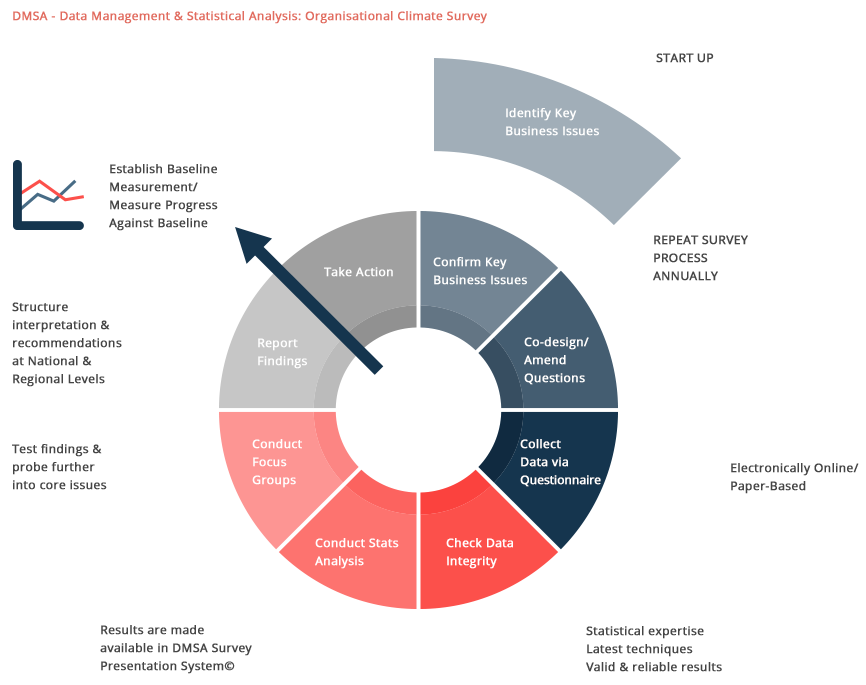